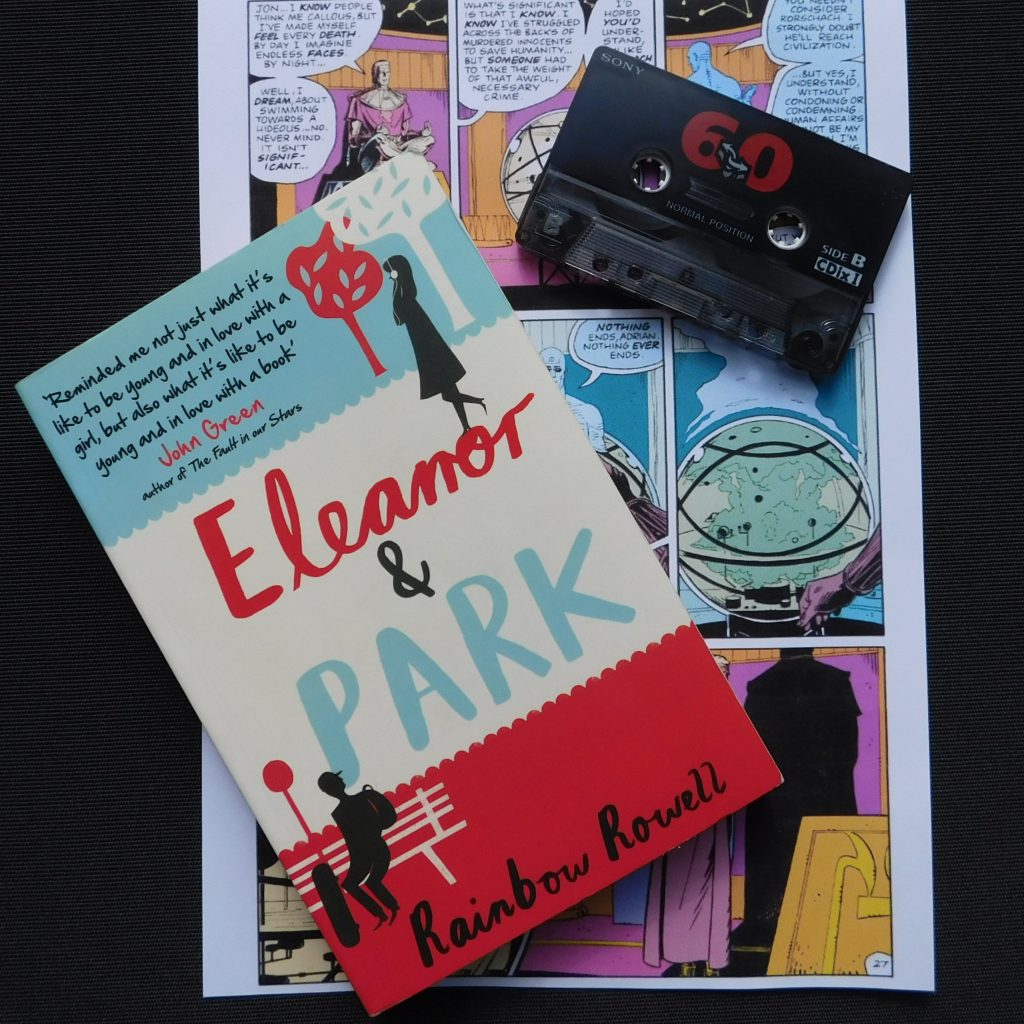 Eleanor is the new girl in town, and with her chaotic family life, her mismatched clothes and unruly red hair, she couldn’t stick out more if she tried.

Park is the boy at the back of the bus. Black T-shirts, headphones, head in a book – he thinks he’s made himself invisible. But not to Eleanor … never to Eleanor.

Slowly, steadily, through late-night conversations and an ever-growing stack of mix-tapes, Eleanor and Park fall for each other. They fall in love the way you do the first time, when you’re young, and you feel as if you have nothing and everything to lose.

I’ll be honest, if I had to write a list of my favourite books, Rainbow Rowell would hold quite a few places on there. She has an amazing knack for writing characters who feel real, who have flaws, but who are ultimately loveable – she writes characters that you want to know, that you want to be friends with.

Eleanor and Park is set in 1986 and opens with our two eponymous heroes meeting on the school bus. Eleanor is looking for a seat that someone doesn’t already have a claim on, or that somebody is prepared to allow her to sit in. A pretty good metaphor for joining a new school part way through the year, with its cliques whose membership recruitments are closed indefinitely (trust me on this, I’ve done it plenty of times). Eventually, Park yells at her to sit next to him to avoid further embarrassment.

It gets better, sort of. Eleanor begins to read his comics in that annoying over your shoulder kind of way. Except that rather than be annoyed by it, he opens them wider and takes longer to turn the pages. He begins lending them to her, all without exchanging a word. Soon, Eleanor is an avid comic reader and Park makes her a mix-tape with music she’s heard of but never actually heard. There’s something about music though, it has this amazing effect on all of us. Never the same effect, but everybody has at least one song that makes them feel a certain way. You know the one I mean, you don’t even need to think about it.

There was something about the music on that tape. It felt different. Like, it set her lungs and her stomach on edge. There was something exciting about it, and something nervous. It made Eleanor feel like everything, like the world, wasn’t what she’d thought it was. That was the greatest thing.

Finally, they speak to one another. They realise that they have things in common; music and comics bring them together. Their friendship soon develops, albeit slowly and with a lot of insecurity on both sides, but develop it does. They fall head over heels, become completely consumed by each other, in that way that you do the first time you really fall in love.

I want to be with you all the time. You’re the smartest girl I’ve ever met, and the funniest, and everything you do surprises me. And I wish I could say that those are the reasons I like you, because that would make me sound like a really evolved human being . . . But I think it’s got as much to do with your hair being red, and your hands being soft . . . and the fact that you smell like homemade birthday cake.

This isn’t the first of Rowell’s books that I read but it’s the one that had the biggest impact on me. The female protagonist isn’t skinny, she doesn’t have glossy blonde hair, she isn’t perfect. She’s the exact opposite of those things, she’s chubby, she has an untameable mane of ginger curls and she has multiple flaws; maybe you can see why I like her so much? Part of the reason that this novel resonated so much with me was that I spent so much of my youth reading books and watching films about beautiful women to whom I couldn’t relate. And I’m not saying beautiful, skinny, blonde women don’t deserve to be happy and fall in love (just to clarify, they absolutely do), but it was nice to see a character who looked like me also getting those things.

She never looked nice. She looked like art, and art wasn’t supposed to look nice, it was supposed to make you feel something.

These characters are flawed. They’re both stubborn, they say the wrong thing (regularly), they don’t know how to act around each other, they’re insecure. Honestly, who can’t relate to that?

I’m not going to spoil it for you by telling you exactly what happens in the end, but as Shakespeare once said “the course of true love never did run smooth” (I promise that’s not a spoiler, the first page tells you as much). Knowing this doesn’t ruin the ending or your constant hope for and belief in a happy ending because the story that Rowell tells reminds you of the love that you think will last forever and conquer the world. Whether it can or not is another question, but I’ll leave you to read the novel and discover the answer for yourself.

He made her feel like more than the sum of her parts.

In case you hadn’t realised by this point, Eleanor and Park is one of my all-time favourite novels. I cannot encourage you enough to go and read it – you won’t regret it. Well, not until you get to that cliff-hanger at the end…

Come back and let me know your thoughts. If you’ve already read it then leave a comment below; did you love it as much as me or could you not disagree more?

You can buy Eleanor and Park by Rainbow Rowell: